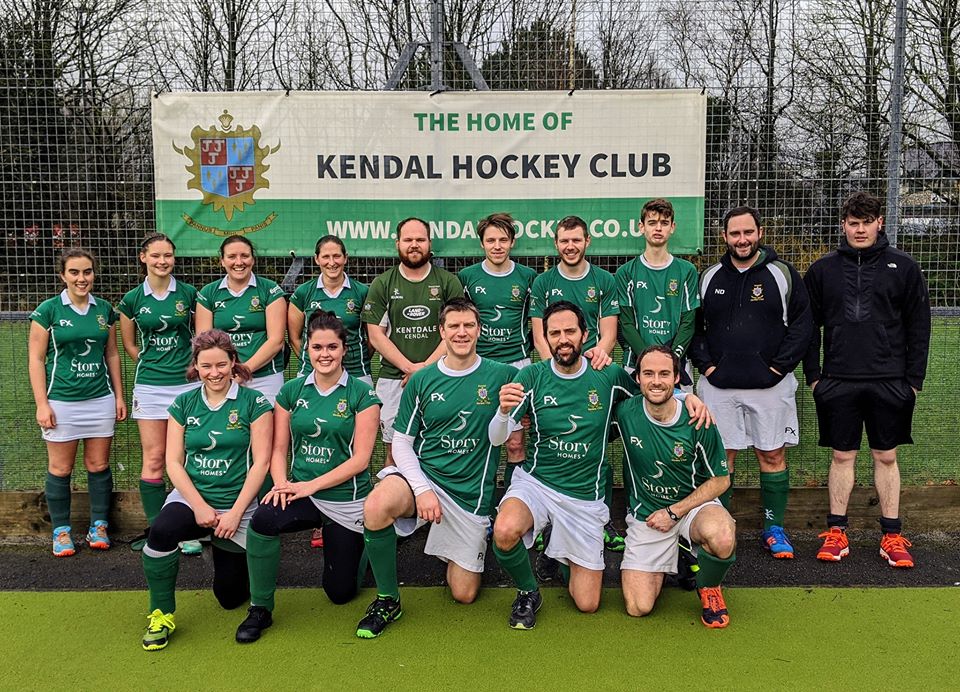 Kendal welcomed Bolton to the Queen Katherine School for their rearranged fixture in the England Hockey Championships.

The teams took to the pitch in good form and the game was played in the friendly spirit it should be. After a brief settling period with the sides sizing each other out it soon became apparent that Kendal were fielding the stronger squad and it wasn’t long before Bolton were waiting for the hammer to fall.

Vicky Whalley-Jones opened the scoring for The Greens. Whalley-Jones’ movement in the Bolton D was excellent and made it easy for Phil Conlin to find her with a quick pass which Whalley-Jones smashed home to give The Mint Cakes a 1-0 lead.

Bertie Anderton and Hannah Wright were composed on the right flank and were both having a splendid half. Their opposite numbers were repeatedly left reeling in their wake as the pair linked up time and time again to lay the foundations for Mint Cake attacks.

Kendal scored again soon after. Andrew Melville picked the ball up and drove toward the Bolton D. He looked up to see Phil Conlin making a run across the back line and unleashed a missile of a pass toward him. Conlin, running at full speed, managed to get the faintest of touches on the ball to deflect it passed the wrong footed keeper. Soon after Conlin scored again when Aaron Screen drove across the back line and seemed to draw the entire Bolton defence toward like moths to a flame. Screen delayed his pass, and finally sent a looping, lethal ball to Conlin who met it on the half volley to make it 3-0 to Kendal.

Several more Kendal attacks followed in quick succession. Despite having already conceded three, the Bolton keeper was increasingly improving his form and denied the Mint Cakes many times with top draw saves. Noah Ross was left dumbfounded after multiple shots of his were saved when all present were sure the in form striker would add to the Mint Cakes’ tally.

Eventually Kendal earned themselves a penalty corner. It was all the keeper could do to parry Melanie Whalley-Jones’ ferocious strike away from goal. Unfortunately for him, he reckoned without the outlandish pace of Nick Davis. The keeper’s save, which initially looked to rebuff Kendal once again, was only pushed directly into the path of Davis. Davis was steaming toward the penalty spot after initially injecting the ball and pounced like a tiger onto the rebound to send the net rippling

The second half started and at first the match continued to favour Kendal. The Mint Cakes set to creating more opportunities to increase the scoreline. Aaron Screen was in scintillating form as he smoothly dribbled passed Bolton players much like water flowing around rocks in a river. Once again Screen saw the movement of Phil Conlin in the opposition D and sent a pin-point pass through to Conlin who deflected the ball past the keeper for his third of the match. 5-0.

It was then that both teams decided to mix things up and wholesale changes were made across the pitch. The Bolton keeper stepped up his game once again and although the chances kept coming for Kendal, there seemed to be no way through.

Suddenly, the visitors were creating chances themselves and arguably the goal of the match came when their striker (who usually plays in goal!) latched onto a pass and slotted it top corner giving the stunned Kendal keeper Rob Cartwright absolutely no chance to make the save. 5-1.

Kendal pushed on. Heather Randell and Hannah Cartwright were showing some classy skills and working together they were forcing their way toward the Bolton goal. Mark Addison, John Stanworth and Gordon Blunt could be seen romping together through the middle of the pitch and seemed to come away with the ball every time they went near it.

Vicky Walley-Jones saw some space down the left wing and promptly attacked it. It looked as though she would be closed down, but Whalley-Jones was too clever for that. She jinked once, twice and then sent the ball to the waiting Phil Conlin. As the ball came passed Conlin he spun on a sixpence and with his first touch he squeezed the ball in-between the keeper’s outstretched foot and the post to finish his player of the match performance with his fourth goal.

Vicky Whalley-Jones then completed her brace when the ball broke to her at the top of the Bolton D. Whalley-Jones wasted no time and dutifully released a thunderbolt of a shot into the goal to make it 7-1.

Another formation change saw Chris Woodman moving into a forward position. Woodman was driving through the Bolton back line with the devastating force of a wrecking ball, before an unfortunate injury forced him off the pitch.

Bolton scored again from a fast break, but it was only a second consolation in a match where The Mint Cakes dominated for the majority of the game.